Recently the editor of Dogs Naturally magazine attempted via an Instagram post to fear monger the feeding of watermelon to dogs.  So, I’d like to go through the bullet list that she presented, and refute each “dangerous side effect” (lol) of feeding watermelon to dogs. 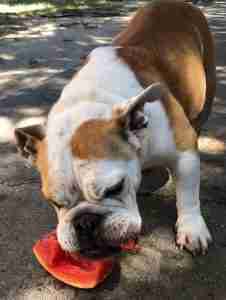 This is an outrageous lie — the polar opposite of the truth.  People struggling to manage their dogs’ weight would do well to add MORE, much more, fruit to their dogs’ diets (and their own diets, for that matter).  Fruit sugars are called ‘pre-digested’ because they are so entirely and easily digestible by every species adapted primarily OR secondarily (as in dogs) to their consumption.  Obesity is a storage issue.  Obesity is a sign of overall body toxicosis because one of the functions of fatty tissues is to store wastes and toxins.  The body only does this if there is more waste being produced in the system than can be eliminated by the primary organs of elimination.  When these organs become backlogged as they very often do when dogs are mis-fed, wastes are stored in fat.  Fruit is EXTREMELY dilute.  It is MOSTLY WATER, in fact.  How on earth can a food that has no fat, no complex sugars, no toxins and is composed mostly of water contribute to obesity?  It’s embarrassing to have to stoop to refuting such effluvia.

Frankly I don’t know where to begin here because I have no idea where this comes from.  You might as well put in a bulleted list that moon spots cause freckles.  Any cogent argument for something being a causal factor in some presumed connected effect must show some correlating evidence OR the claimed factor itself must lend context to the assertion.  Premature aging is a complicated process caused by many factors that could not possibly include a natural, water-rich, biologically appropriate food like watermelon.  For the purposes of this post I just had a quick look at the top search results for “foods that contribute to premature aging” and fruit was nowhere to be found.  Everybody knows which foods contribute to aging in both humans and dogs, even the people who CONSUME them and feed them to their dogs.  It’s common knowledge now that the more processed, refined, adulterated and otherwise messed-with a food is (and whether it’s even ‘food’ to begin with), the more it causes “premature aging”.  To think that a food like watermelon should figure anywhere into it has to be the crazed invention of someone’s mind.

Every health practitioner on earth is on board this particular gravy train, including ALL so-called “holistic” practitioners and their money-generating vehicles like Dogs Naturally magazine.

More absurdity.  Humans and dogs alike are actually REVERSING diabetes with diets high in fruits.  Refined sugar is toxic to the body and prevents uptake of nutrients, but even refined sugar is not the problem with diabetes.  No matter how much we hear to the contrary from the pharmaceutically supported mainstream media, the main culprit in diabetes is NOT sugar at all.  Bariatric surgeon Garth Davis states “In a study of 500,000 people, carbohydrate consumption was shown to be inversely correlated with diabetes”.  The REAL culprit in diabetes, it turns out, in both humans and dogs, is ANIMAL FAT.  A diet rich in animal fat causes muscle cells to become resistant to insulin, which creates an overwhelming burden on the pancreas.  When the organ can no longer keep up, that’s diabetes.  Does anyone really think that the reason there’s so much diabetes among dogs and humans is that they are eating too much fruit?!  Commercial dog food is what the majority of domestic dogs eat, and it typically contains no fruit at all.  But animal fat is all but ubiquitous because it’s a cheap, available waste product of the human food production system that nobody questions because it’s attached to the protein that is blindly prized by the typical brainwashed consumer.  Nobody in the supply chain is removing fat, no matter how expensive the end product is, and that’s why dogs have diabetes.  Even 100% RAW FED dogs can have diabetes if their diets are too high in animal fat.

The writer of this list is apparently not aware that inflammation is a life-saving mechanism that the body employs to manage its waste and keep harmful substances from damaging sensitive tissues.  When superfluous wastes are deposited in various areas of the body (having no place to go because normal outbound routes are backlogged), the body sends heat and fluids to areas where healing needs to be accomplished or to otherwise protect itself.  That’s inflammation.  It should not be FORCED to stop, as is what happens when drugs and “natural” remedies are employed to fight or subdue it.  Its causes simply need to be understood and removed.  As I stated above, fruit does not and could not contribute to the waste load of the body, in dogs or humans.  Fruit is almost entirely water, particularly watermelon!  Feeding NOTHING BUT watermelon to a dog for a couple DAYS (as many people are doing) is bringing amazing results to those who’ve tried it.  People are even feeding mono-meals of watermelon for many days or weeks on end to reverse chronic conditions and are having major success, EVEN in inflammatory conditions involving much more than “low level” inflammation.  In fact, members of my Facebook group have had SO much success that word is getting out about fruit mono-feeding on Instagram and I suspect that’s what accounts for the backlash.  After all, if dog owners employ these very powerful methods that allow the body to heal ITSELF, they don’t need the useless, expensive products sold by the likes of Dogs Naturally magazine.  Self-healing and self-empowerment require NO PRODUCTS and therefore make nobody any money.  That’s the bottom line, and almost always accounts for people attempting to cast aspersions on extremely beneficial foods like watermelon, and fruit in general.

This is yet another indication that the writer does not know enough about how life works in general. Life as we know it would cease to exist if these small brilliant creatures did not break down everything that dies.  Dead matter would soon pile up inside and outside of us and make life impossible.  Knowing this one little fact allows us to understand why they come around when they do, what’s attracting them, and, if we don’t want them around, how to keep them away.  And it’s surely not by avoiding an entirely healthful food (for dogs and humans) like watermelon.  ALL of these organisms are natural residents of the body and their presence there is SYMBIOTIC (mutually beneficial!).  When they proliferate, as they very often do in mis-fed dogs, it’s because they were INVITED.  Waste is what invites bacteria, yeast and parasites.  A properly fed dog will NOT have a backlog of superfluous wastes being stored and perpetually circulating in his body, looking for outbound routes like the skin and ears, and will NOT be a target for over-populous microscopic scavengers. The reason why yeast is found on the skin and in the ears when inflammation is also present is because it’s there helping to clean up the mess.  It’s the same for bacteria and parasites. Killing them with poisons and ignoring the reason they are there is like killing flies around a garbage can rather than just getting rid of the garbage.  The aim of every drug and remedy used to ‘battle’ microscopic organisms is to simply kill the clean-up crew.  It’s shameful that we’ve declared such an ignorant war on the natural microscopic world rather than trying to understand it.

Is watermelon good for dogs?

Well, it should be obvious by now that it most definitely IS, and I don’t think I have to list all the beneficial nutrients it has in it.  Try telling this wolf that watermelon is not dog food:  https://www.youtube.com/watch?v=k4tsocvC0xk Please do not be persuaded away from offering real food to dogs by profiteers seeking to discredit the methods for reversing disease that deprive them of their ill-gotten gains.  Everyone has to earn a living, but you don’t have to take advantage of dog owners to do it.

6 thoughts on “Is Watermelon Good for Dogs? YES!!”